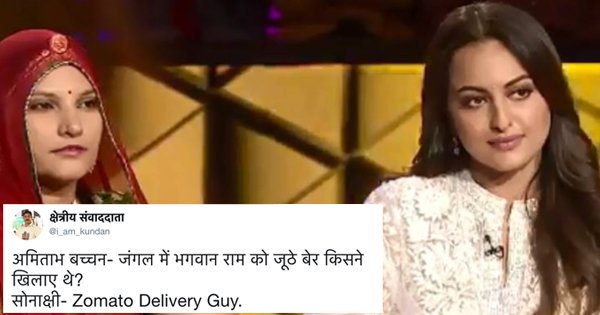 When one’s father’s name is Shatrughana, the names of uncles- Ram, Lakshmana, Bharata, bungalow’s name- Ramayana, brother’s name- Luv and Kush … that person will be expected to know the origin of Ramayana.

Film actress Sonakshi Sinha appeared in a special episode of KBC, answering the questions of show host Amitabh Bachchan along with another contestant. On the computer screen, the question came in front of her, for whom did Hunman ji bring Sanjeevani Booti? Neither Sonakshi nor the other female contestant had the answer to this question. The correct answer was given by taking an expert opinion.

#YoSonakshiSoDumb No doubt !!
But Alia is still the Queen Bee ???? pic.twitter.com/n5qnTkTQHh

Expecting Sonakshi Sinha to know Ramayan because her house is named so is like me expecting my driver to know Henry Ford because he drives my Fiesta. #YoSonakshiSoDumb

Aaliya Bhatt must have been happy after that episode, a similar incident had happened to her, he did not know the name of the President of the country.