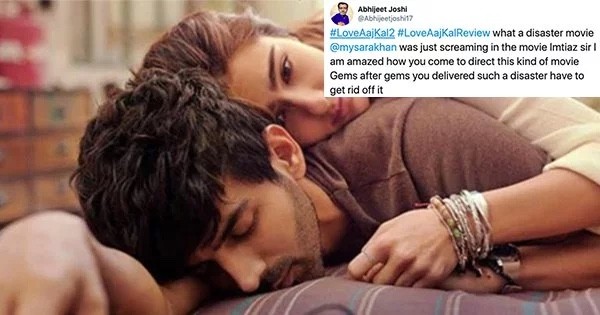 Kartik Aryan and Sara Ali Khan’s film ‘Love Aaj Kal 2’ has been set in theaters today. Today there is also valentines day and the weekend is also coming, so many people will be planning to see this film.

In this case, before booking a ticket, you will want to know whether you really should spend your money on this movie or not. So, we have removed this problem for you. Before booking tickets, take a look at these tweets of people:

#LoveAajkal tells us how we only complicate our lives, by overthinking and over expecting.
1st half is cool. #SaraAliKhan is beautiful, #KartikAaryan plays 90s Raghu & mordern age Veer so well.
& there's a reason we didn't see #ArushiSharma much in promotions.#LoveAajKalReview

Negatives: Story is not fresh, Screenplay is dull & confusing, Editing is average!

#Interval: #LoveAajKal
Probably the most DEAD BORING film ever that I'm watching! #KartikAaryan is making me miss Fardeen Khan on screen & looks like he hasn't showered in months! #RandeepHooda is hot as usual, #SaraAliKhan is super fresh & has a good character. #LoveAajKalReview

It's like I'd been judging @TheAaryanKartik all long without giving him a chance to prove himself. Now that he was given one w #LoveAajKal, he's clearly hit the ball our of the park & proved that he's here to STAY! 🙂#LoveAajKalReview

#LoveAajKalReview
My Friend: Why did you watched Love Aaj Kal 2
Me: pic.twitter.com/YtpN4QwVji

So what is the plan?