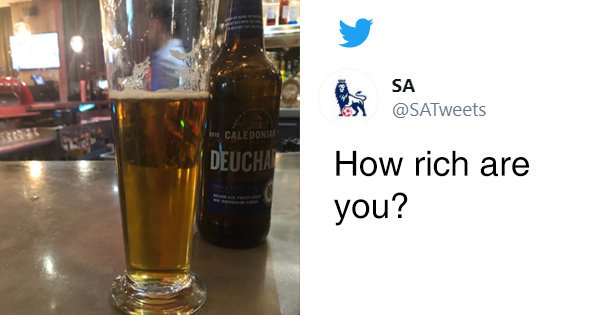 The Australian’s cricket writer, Peter Lalor, bought a bottle of Deuchars IPA at the Malmaison Hotel, before the fourth Test match at Ashes.

It’s a good beer. The original version of it won a heap of awards, including the Supreme Champion Beer of Britain, but if you are thinking that no beer is worth the best part of $100,000, then I am inclined to agree with you.

Usually this beer comes to $ 6.75 but it became the most expensive beer in history.

According to reports, the hotel has apologized after the billing error and has started an investigation.

Taking cognizance of the mistake, the manager immediately started the process of refund. Peter also had to pay a $ 2,499 Transaction Fee with the wrong price.

Peter asked how can the bank allow such a large amount of transaction.

ya that bear better come with three life times of refills, and sharable with friends.

I'm pretty sure this is SOP punishment for following Cricket instead of Futbol!

How rich are you?

I have a rough time feeling sympathy for pretty much anyone with $100K in their checking account.

So it wasn't that good then?