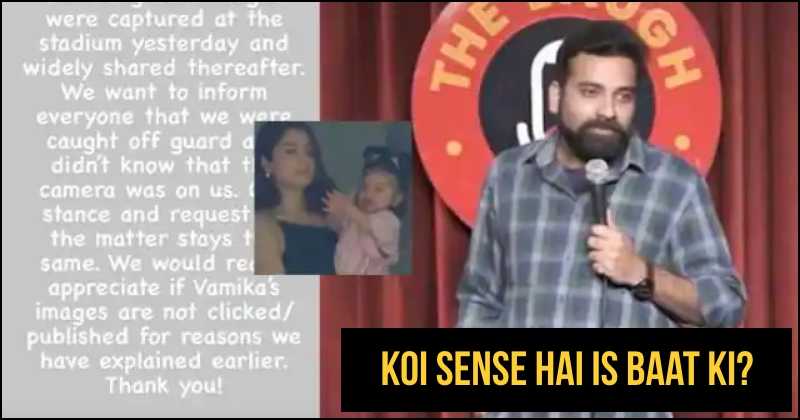 Anushka Sharma wrote in her Insta story, ‘Hi guys! We realise that our daughters images were captured at the stadium yesterday and widely shared thereafter. We want to inform everyone that we were caught off guard and didn’t know that the camera was on us. Our stance and request on the matter stays the same. We would really appreciate if Vamika’s images are not clicked/ published for reasons we have explained earlier. Thank you!‘

Bhai if you are in the stadium then 100% cameras will be on you and your families why are you acting like you don’t know this thing 😭 https://t.co/aAaw1RGzWZ

Anushka Sharma has made this appeal to the people

Anushka Sharma further wrote – We will be thankful if Vamika’s pictures are not taken or published. The reason for this is the same as what we have told you earlier. Thanks. After Anushka Sharma made this post, she started trolling on Twitter within a few minutes. Many memes were made on her, which people are now reading and sharing a lot.

if self roast had a face 🥲🤌🏻
Bruh, there is no fu*ing mistake of that camerman, u both are such a big celebs but🥲🤌🏻 it’s so obvious, u came in the stadium nd camera man will capture every people who coming in the frame ! No use of this story !!!#VamikaKohli #ViratKholi pic.twitter.com/WK37D1ZAzd

A user took a screen shot of Abhinav Bassi’s video and shared it with Anushka Sharma’s post and wrote – Koi Sense Hai Is Baat Ki? Another troll shared the photo of the cat and wrote – Vamika’s reaction will be like this in the next match. I don’t want to go to watch the match. People take photos. Sharing Vamika’s post, a person wrote, ‘Brother, if you are in the stadium, the cameras will be 100% on you and your family.’

#ViratKohli 🤷‍♀️
Though I din post #VamikaKohli ‘s any pics as I respect their privacy but itz silly to b in a stadium n think camera doesn’t capture thm 🙄
If their privacy is tht imp thn they shld have watched match in a closed room instead of giving public appearance pic.twitter.com/aJhBbC21jS

One user wrote, ‘Why are you acting like you didn’t know when the pictures were clicked?’ Similarly, many users have shared all the memes. Anushka Sharma hashtag is trending on Twitter and while many people are supporting Anushka, as usual, once again Virat Kohli’s wife Anushka Sharma is being trolled.